The legendary story of Maid Marian

Stephen and Yhana is the official youtube channel for this blog and author, a shared adventure with his daughter.
Featuring: Days Out in the UK / History / Genealogy / Virtual Walks / Virtual Cycling / Travel and so much more. Feel free to visit, subscribe and watch out for all of our upcoming episodes.

How you can easily create beautiful art for your home or your loved ones by Peter Black, founder of – Charmaché Art and Craft 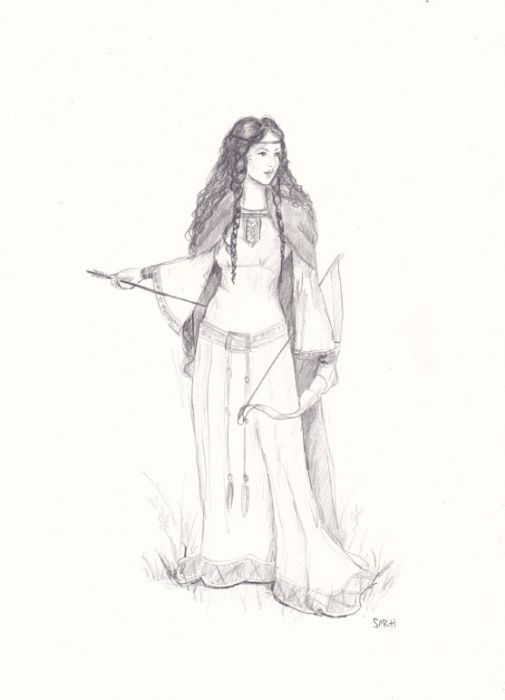 Murdered with a poisoned bracelet not long after her 18th year and now lies buried in the Priory Church of Little Dunmow.

Today I added the 35,000 person to my family tree, and so to celebrate this huge achievement, I thought It was a good time to publish a post about one of my favourite stories relating to my family history (even if it is – only a story), this story is connected to my 22x great grand aunt Matilda FitzWalter, who over time has become connected with the fabled and legendary Maid Marian. 2015 also see’s us into the 800th anniversary year of Magna Carta, so a story from the reign of King John is perfect.

The following story was written in 1831 (no longer in copyright) and published in 1834 in The Graphic and historical illustrator by E W Brayley.

This interesting and venerable relic of the olden time stands in a cornfield, about four miles distant from the town of Dunmow. It was formerly the eastern end of the south aisle of a magnificent collegiate church, erected for the joint use of the parish, and of a religious house, founded A. D. 1104, by Juga, sister of Ralph Baynard, (who held the manor at the time of the Domesday survey) for a prior and eleven canons, of the order of St. Augustine, and consecrated by Maurice, Bishop of London. At the suppression, this monastery was given to Robert, Earl of Sussex, by that rapacious sovereign, Henry VIII. ; but it has since been in the possession of several different families. —
It was on a bright and beautiful morning at the latter end of October, 1831, that I set out from the town of Dunmow, in quest of this little temple. I had more than one inducement to lead me there, for, besides its having been so long celebrated for the jocular ceremony of awarding the flitch, or gammon of bacon (thrice performed within its walls previous to the Reformation), it is there that the fair Matilda lies buried, who, better known by the name of Maid Marian, shared the fortunes of Robin Hood. the name Marian was originally assumed by a ” lady of high degree’ who was murdered at Dunmow priory.
I unlocked the nail-studded door, and entered the church. The sunbeams, which streamed through the delicate tracery-work of three lofty windows, shed a mild radiance upon the surrounding objects, and the serenity which pervaded the whole scene, so different from the turmoil of the world, seemed powerfully to whisper, This is none other than the house of God.” A beautiful airy screen of dark oak, curiously carved, and probably coeval with the pile itself, separates the body of the church from the chancel; on the left side of which, between two pillars of the Tuscan order, I found, as I expected, the fair alabaster Effigy of the celebrated Matilda. The face, although much disfigured, bears traces of former beauty : her hands are clasped as in prayer. The following description of this figure, (together with the annexed representations,) is derived from Gough’s Sepulchral Monuments. On the head, which reposes upon a cushion, is a covering like a woollen night-cap. She has a collar of SS; a necklace of pendents falling from a rich embroidered neckerchief; a rich girdle, and long robes, the sleeves close to the wrists, and slit there. Her fingers are loaded with rings, there being two on several of them. Her face is round and full, but rather inexpressive. At her head were two angels, now mutilated, and a dog on each side her feet. According to the ” Chronicle of Dunmow,” in the Monasticon, vol. ii. p. 76, she was buried between two columns in the south part of the choir ; but her effigy, with its slab, is now placed upon a gray altar tomb in the position before mentioned. The tomb is decorated with shields in quatrefoil, parted by pairs of arches, and evidently of a more modern style than the incumbent figures. This lady’s history is briefly as follows : — 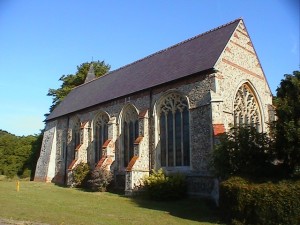 She was the daughter of Robert, Baron Fitz-walter, proprietor of Castle Baynard, who is distinguished in English History, as the ‘Marshal of the Army of God, and Holy Church ;” and the leader of the illustrious barons, who extorted Magna Charta from King John. Upon her entering her eighteenth year, he invited the neighbouring nobles to a costly banquet. For three days, jousts and tourneys delighted the assembled guests, and won honour and lady’s love for many a new-made knight. On the fourth, a strange warrior, cased in mail, entered the lists, and vanquished the bravest of the combatants; his gallant bearing and handsome features enamoured the fair young queen of that high festival, and she blushed deeply when she hung the golden chain around the victor’s neck, and kissed his lofly fore head. His countenance was clouded with sorrow, and as he came so he departed, none knew whither. Prince John (afterwards king), who had honoured the castle with his presence, became smitten by the charms of the high-born maiden, and basely endeavoured to obtain her for a mistress. The Baron Fitz-walter, her father, treated his proposals with just and natural indignation, which so enraged the headstrong prince, that (taking advantage of his brother’s absence in Palestine, where the greater part of his followers were likewise fighting) he immediately attacked Castle Baynard, and slew its owner: but Matilda fled away to the green forest, and there, on the day following, was again met by the stranger knight; his burnished steel was laid aside, and he was clad in Lincoln green, the archer’s garb. He told the lady that he was Robin Hood, the outlawed Earl of Huntingdon and that he would shield her innocence from the fierce and cruel ravisher. The prince discovered her retreat, and attacked the foresters; a sanguinary fray ensued, during which it is said that John and the lady (who was then in male attire) met and fought. The prince required her to yield, and she resolutely desired him to win her first, and so stoutly did she repulse him, that he was constrained to withdraw from the ungallant contest. This part of the story places Matilda in a somewhat unfeminine light, but great allowances must be made for the customs of that age, and the peculiar circumstances of her case. She afterwards married Robin Hood, and when king Richard restored him his earldom and estates, she became Countess of Huntingdon : when her husband was again outlawed by King John, she shared his misfortunes, and, at his death, took refuge in Dunmow Priory (which appears to have been enriched by some members of her family), trusting to spend the residue of her days in peace. The tyrant, however, who had never forgotten her bravery in Sherwood forest, dispatched a gallant knight, one Robert de Medewe, with a token to the fair recluse, — a poisoned bracelet. Ignorant of the accursed deed he went to perform, Sir Robert arrived at the priory, and was respectfully and cordially received. Matilda had lost the bloom and vivacity of youth, but her mien was stately, and her person still imposing. The rough warrior felt the flame of lore kindling in his bosom, but he strove to stifle it, and, bidding the lady a hasty adieu, speedily departed. Whilst on the road to London, his fond feelings waxed stronger and stronger the farther he proceeded from the object of them, and, at length, being unable any longer to curb his passion, he turned his horse’s head, and retraced his way. It was night when he reached the priory, but the light of many tapers streamed through the windows of the adjoining church on the weary soldier, and the solemn dirge of death awoke the slumbering echoes. With fearful forebodings he entered the house of prayer, and there in the chancel, on a bier and covered with flowers, was stretched the lifeless body of the unfortunate Matilda The bracelet was on her wrist, it had eaten its way to the bone, and the fiery poison had dried her life blood. The flesh was ghastly pale, but a heavenly smile irradiated her fine countenance : the priests were standing around, weeping, and the disarray died away on their quivering lips when the warrior entered. He flung himself upon the lady’s corpse, invoking a thousand maledictions upon his own head. No persuasions could induce him to return to the camp and court, but, resigning his mail for the cowl and gown, he became a faithful brother of the order of St. Augustine. 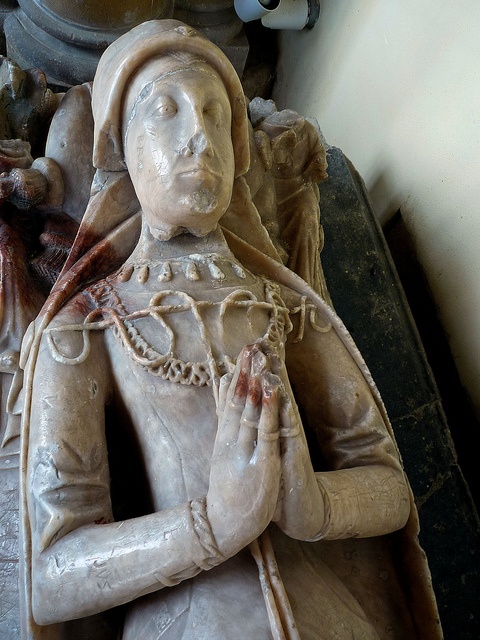 One thought on “The legendary story of Maid Marian”